October 27, 2014 (Bloomberg Business Week) –Ethiopia’s government illegally detained at least 5,000 members of the country’s most populous ethnic group, the Oromo, over the past four years as it seeks to crush political dissent, Amnesty International said.

Victims include politicians, students, singers and civil servants, sometimes only for wearing Oromo traditional dress, or for holding influential positions within the community, the London-based advocacy group said in a report today. Most people were detained without charge, some for years, with many tortured and dozens killed, it said.

“The Ethiopian government’s relentless crackdown on real or imagined dissent among the Oromo is sweeping in its scale and often shocking in its brutality,” Claire Beston, the group’s Ethiopia researcher, said in a statement. “This is apparently intended to warn, control or silence all signs of ‘political disobedience’ in the region.”

The Oromo make up 34 percent of Ethiopia’s 96.6 million population, according to the CIA World Factbook. Most of the ethnic group lives in the central Oromia Regional State, which surrounds Addis Ababa, the capital. Thousands of Oromo have been arrested at protests, including demonstrations this year against what was seen as a plan to annex Oromo land by expanding Addis Ababa’s city limits.

Muslims demonstrating about alleged government interference in religious affairs were also detained in 2012 and 2013, Amnesty said in the report, titled: ‘Because I am Oromo’ – Sweeping Repression in the Oromia Region of Ethiopia.

The state-run Oromia Justice Bureau said the findings were “far from the truth” in a reply to Amnesty included in the report. “No single individual has been and would not be subjected to any form of harassment, arrest or detention, torture for exercising the freedom of expression or opinion.”

The majority of detainees are accused of supporting the Oromo Liberation Front, which was formed in 1973 to fight for self-determination, according to Amnesty.

Senior Oromo politicians Bekele Gerba and Olbana Lelisa were jailed in 2012 for working with the group, which was classified as a terrorist organization by lawmakers in 2011.

“The accusation of OLF support has often been used as a pretext to silence individuals openly exercising dissenting behavior,” Amnesty said.

The bulk of Amnesty’s information came from interviews with 176 refugees in Kenya, Somalia and Uganda in July this year and July 2013. More than 40 telephone and e-mail conversations were also conducted with people in Ethiopia, it said.

Some interviewees said they fled the country because of conditions placed on them when released, such as being told to avoid activism, meeting in small groups, or associating with relatives who were political dissenters, the report said.

Amnesty has been banned from Ethiopia since 2011 when its staff was deported. 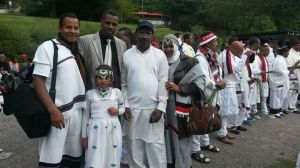